Commercial veal calves in the United States may be deficient in iron as an outcome of consuming primarily milk or milk replacer with limited grain intake. Iron deficiency promotes the desired coloration of veal, but may also predispose calves to metabolic stress. Tri-Lution® contains proprietary, probiotic strains of Saccharomyces cerevisiae and Enterococcus faecium, which is a lactic acid producing bacterium. Together with prebiotic nutrients, these probiotic microbes are hypothesized to sequester coliform bacteria and promote reductive fermentation in the intestine. In January 2017, a commercial veal calf grower in the midwestern United States reported to us that calves fed Tri-Lution® showed improved dietary intake, manure consistency, and thrift compared with control calves during an internal performance trial. The calves in that trial became the subjects of the present study, of which the objective was to quantify metabolic differences between control and Tri-Lution®-fed calves. 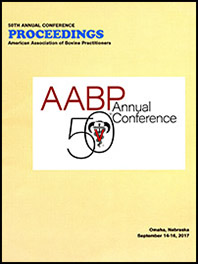